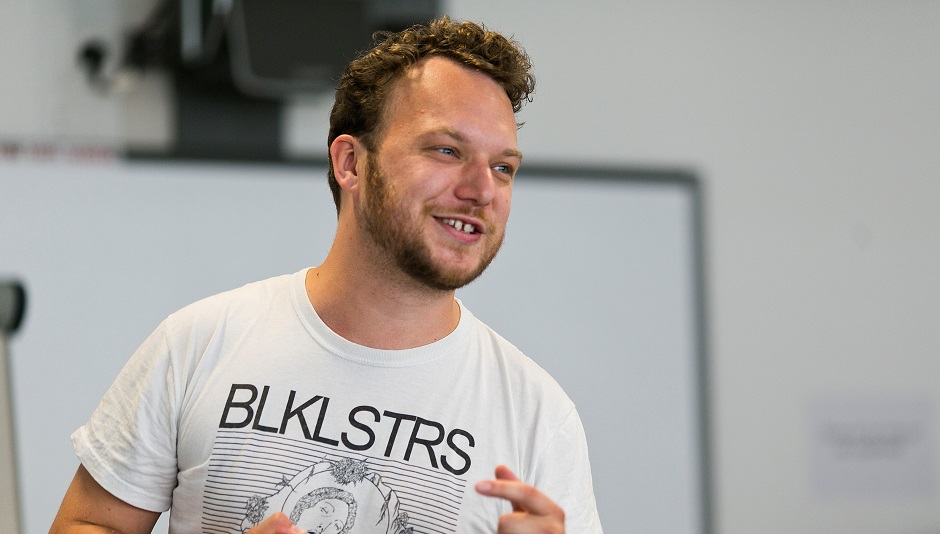 At least 50% of theatre is visual but playwrights are seldom considered to write the visuals so much as the words actors speak. In Oliver’s career he has written a play without words. He has written for puppets. When he writes radio drama, he is always thinking about what the audience will see. Using his own work and practice as a starting point, Oliver will discuss what it is to write for the stage and radio, about how story can be carried visually, and about what it is like to see a 10-foot dragon come to life.

Oliver Emanuel is an internationally award-winning playwright based in Scotland. He has written over 30 plays for both stage and radio, and is also Reader in Playwriting at the University of St Andrews and an Associate Playwright at the Playwright Studio Scotland. Oliver is currently working on the third instalment of ‘The 306: Trilogy’ and new work for BBC Radio 4.

The Truth About Hawaii won Best Audio Drama at the ISNTD Festival 2018. Flight won a Herald Angel at the Edinburgh International Festival 2017; and has recently completed a three-month New York Times Critic’s Pick run at the McKittrick Hotel, New York. Oliver was a lead writer on ‘Emile Zola: Blood, Sex & Money’ for BBC Radio 4 which won Best Adaptation at the BBC Audio Drama Awards 2017. His English language version of Jan Sobrie’s Titus won The People’s Choice Victor Award at IPAY 2015. Dragon was the first play for young people to be performed at the Edinburgh International Festival and won Best Show for Children at the UK Theatre Awards in 2014.

Please note that tickets for this event are e-tickets. Book online and have your tickets emailed directly to you – then save the environment by bringing along your e-ticket on your phone or tablet and have it scanned as you enter the event. If you would prefer to print your ticket, black and white is fine.

A print and collect service is available to those without access to email facilities for a small charge to cover our admin costs. Call 01244 532350 or email [email protected] for more information. Printed tickets will be available to collect from Reception before the event.

Your book will be available to collect from Reception at or before the event.