The school announced Thursday (Aug. 2) that Heath would be replaced by L. Gregory Jones, who served as dean of the school from 1997 to 2010.

Elaine Heath was hired in 2016 and oversaw the United Methodist-affiliated seminary with some 600 students and six degree programs during a turbulent time in which both African-American and LGBTQ students protested a lack of inclusion and diversity among faculty.

No official reason was given for the change, but Michael Schoenfeld, vice president for public affairs and government relations, told the Duke Chronicle, the university newspaper: “The leadership of the University and the Divinity School agreed it was important to make transition now so they could begin the academic year by working in close collaboration with faculty, staff and students on the School’s current challenges and future opportunities.”

Heath will remain at the school as professor of missional and pastoral theology but will be on sabbatical until January 2019.

Seminary education has been under strain in the past few years as fewer admissions and shrinking budgets have led to consolidations and mergers. As a divinity school embedded in a larger university, Duke has been shielded from some of those strains, but it has faced pressures to diversify its faculty, as have other schools.

Earlier this year, some students protested Heath’s State of the School speech by walking out as she was speaking. The students were pressing for a course in queer theology and more affirmation of LGBTQ students from the faculty.

In recent years, the school has seen the departure of three prominent African-American faculty, though only one, J. Kameron Carter, left on Heath’s watch. This past year, Heath made concerted efforts to hire new black faculty, including Patrick Smith, a philosophical and medical ethicist, and David Goatley, the new director of the Office of Black Church Studies.

But Heath’s attempts to improve the school’s diversity also came with a measure of controversy. Last year she sparred with another faculty member, Paul Griffiths, a professor of Catholic theology, who urged other faculty not to attend a school-wide diversity training, saying it was “intellectually flaccid” and had “totalitarian tendencies.” Heath accused Griffiths of “unprofessional conduct,” and he stepped down shortly afterward. 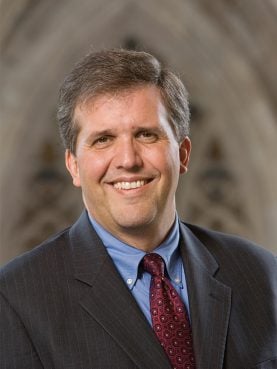 Duke is not the only school to face student protests related to a lack of diversity. Last spring, Fuller Theological Seminary in Pasadena, Calif., faced a wave of protests over lack of racial diversity in which students said the culture at the seminary was toxic.”

In an email to faculty and staff, Jones said he would continue Heath’s efforts to diversify the faculty: “We have important challenges to address, including continuing the work of diversifying the faculty, staff and student body, and building an ever-more inclusive and welcoming environment for all, so that we may have a richer common life.”

The school is expected to launch a national search for Heath’s successor.