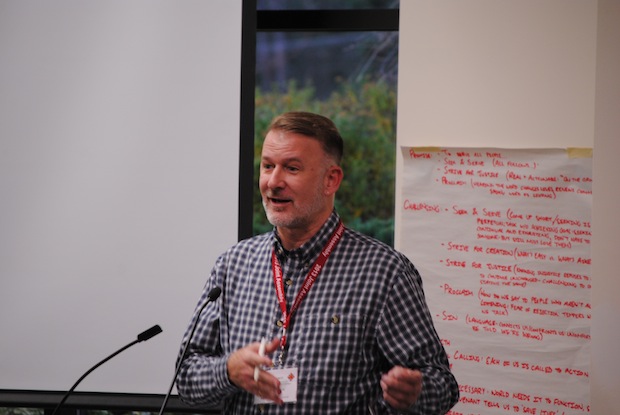 What kinds of things ought the Anglican Church of Canada and the Evangelical Lutheran Church in Canada (ELCIC) take into account in any decision to divest from fossil fuel companies? The question, when posed to a joint session of Council of General Synod (CoGS) and ELCIC’s National Church Council (NCC), brought a range of responses, with many participants voicing notes of caution and underscoring the need for more information, given the complexity of the issue.

The question arose from a gathering on November 14, looking back at the Joint Assembly Declaration (JAD), a statement jointly released by the two churches following their joint assembly in 2013. The declaration, said the Rev. Paul Gehrs, ELCIC’s assistant to the bishop, justice and leadership, committed the two churches to work together on a number of social issues, including homelessness, affordable housing and responsible resource extraction. The declaration, he said, also made mention of the 2007 UN Declaration of the Rights of Indigenous Peoples.

It also states that mining and drilling projects are often carried out on the traditional territory of Indigenous peoples without their consent.

Meanwhile, since the JAD was issued, a number of faith groups have moved toward divesting from fossil fuels, and Anglican Church of Canada Primate Fred Hiltz and ELCIC National Bishop Susan Johnson both felt the session on might provide a good opportunity for the members of both churches’ national councils to discuss divestment, Gehrs said.

Faith groups that have decided to divest from fossil fuels include the Church of England, The Episcopal Church, the Lutheran World Federation and the United Church of Canada. The World Council of Churches, which currently does not invest in fossil fuel companies, has confirmed that it will not invest in them in the future. In Canada, the Anglican dioceses of Ottawa and Montreal have voted to divest also.

At the joint CoGS-NCC session, attendees were divided into a dozen groups to tackle the problem. Henriette Thompson, the Anglican Church of Canada’s public witness for social and ecological justice, introduced the main points for consideration.

One, she said, is that there was now scientific consensus that carbon emissions need to be kept to a level that will result in a global temperature increase within two degrees Celsius—meaning current emission levels will have to be decreased dramatically given current trends, she said.

“At current emissions levels, we are heading to a four degrees Celsius increase,” Thompson said. “Scientists predict that this level will produce severe disruptions, damage and dislocation in all global regions, and we’re seeing evidence of this already. To reduce emissions, the majority of fossil fuel reserves need to remain in the ground and unburned.”

Another point, she said, is that divesting from companies involved in fossil fuel extraction is one way to signal to those companies the necessity of curbing their efforts to mine and drill.

A third point, Thompson said, is that the current climate crisis is ultimately a spiritual issue.

She asked CoGS and NCC members to consider three questions: what are your reflections on the call to divest from fossil fuels and invest in alternative energy? How do we balance the seemingly competing interests of environment, jobs, sustainable livelihoods and Indigenous rights? What do we need to take responsibility for in order to address the climate crisis?

After a quarter-hour of discussions, not one of the groups called for immediate divestment; most seemed to voice either opposition or at least a call for caution.

Some questioned the merits of divesting from fossil fuels companies, as opposed to reducing consumption of fossil fuels as a way of reducing carbon footprint.

“The problem is not necessarily around extraction but consumption,” the spokesperson for one group said. “It’s not just the idea of changing how we get energy, but changing how much energy we take in general.”

Others expressed fears that the divestment movement would lead to the “demonization” of energy-sector employees and companies.

“It’s an emotional issue,” one spokesperson told the gathering. “My biggest concern is we do these things without thinking, sometimes too fast, and we hurt our own people. For those of us from the west and north, those are big issues for us…They’re our families, and our children.”

Several groups argued that, given the complexity of the issue, they simply didn’t have enough information to make an informed decision.

“This is an extremely complicated process,” said one group representative. “You get some people who really push for it and don’t think of the consequences on the ground.”

Another group spokesperson said the members of his table were not even informed enough to be aware of the gaps in their own knowledge of the issue.

Speaking last, Hiltz, who had discussed the issue with Johnson and others, said their consensus was that CoGS and NCC should enlist the help of experts in the energy sector, labour issues and Indigenous rights for future conversations about divestment.

“We need the benefit of some expertise in the room,” he said. “Imagine what it would be like if we had a panel with three or four people that engaged us, stretched us, pulled us, and then we moved into these conversations together.”

These experts, he said, could easily be drawn from the Anglican Church of Canada and ELCIC themselves.