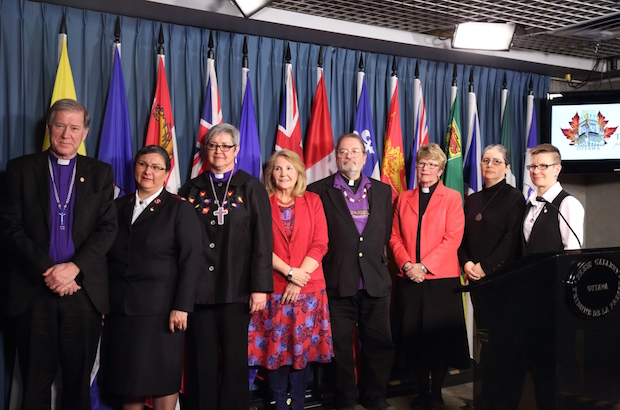 The Anglican Church of Canada and seven other Canadian churches and religious organizations have declared their commitment to the Truth and Reconciliation Commission of Canada’s (TRC) Call to Action #48.

In issuing an ecumenical statement at a news conference on Parliament Hill March 30, representatives acknowledged the failures of their churches and organizations to respect the rights and dignity of Indigenous peoples. As well, said the statement, “We acknowledge the harm done and are committed to journeying together towards healing and reconciliation.”

Call to Action #48 is aimed at implementing the principles, norms and standards of the United Nations Declaration of the Rights of Indigenous Peoples as the framework for reconciliation. It was the only one of the 94 Calls to Action that challenged the churches, faith groups and interfaith social justice groups to respond before the TRC’s deadline of March 31.

Call to Action #48 “necessitates a fundamental reordering of our relationship, and a significant change in our identity as a country,” said the statement. “It requires us to truly respect Indigenous peoples’ right of self-determination and to acknowledge and respect nation-to-nation relationships based on mutuality and respect.”

Bishop Mark MacDonald, National Indigenous Anglican Bishop, delivered the ecumenical statement on behalf of the group. “The commitment to Call to Action #48 represents a vital step forward for the church,” he said. “If it lives into, embodies and follows the Call, it will bring a transformation in the relationship with Indigenous peoples and within the church.”

What the church is saying [by affirming the UN declaration on the Rights of Indigenous Peoples], said MacDonald, is that “it will never again partner with cultural genocide.” In implementing the Call in its life and ways, the church promises “not to be a part of such a thing in the future,” he added.

TRC Commissioner Marie Wilson responded to the statement on behalf of the three-member commission headed by Justice Murray Sinclair.

She noted that other churches and faith organization that were not involved in the residential school system have also supported the Call to Action #48.

“This ‘coming forward’ of this community of faith is extremely important,” she said. “I think that people are standing together to speak to their pledge to keep reconciliation as a ‘going forward’ phase and not a ‘moment in time.’ ”

Wilson said the commission drafted the 94 Calls to Action in response to the 7,000 people who spoke to the commission during its hearings. “We did not issue them to make people feel comfortable or invite them into a process of reconciliation that would amount to a kinder, gentler form of assimilation,” she said. And they were referred to as Calls to Action “because we didn’t want them to seem optional,” Sinclair added. “We wanted them to sound imperative.”

On behalf of the TRC commissioners, Wilson acknowledged “the support and work” of the churches and other religious organizations, and pledged “on behalf of survivors, to continue to hold the faith communities to account and do what they say they are going to do.”

Archbishop Fred Hiltz, primate of the Anglican Church of Canada, attended the news conference as an observer.

The Canadian Religious Conference and the Christian Reformed Church in North America also signed the ecumenical statement but were not at the news conference.

The Canadian Conference of Catholic Bishops and other Catholic organizations jointly released their statement on Call to Action #48 March 29.