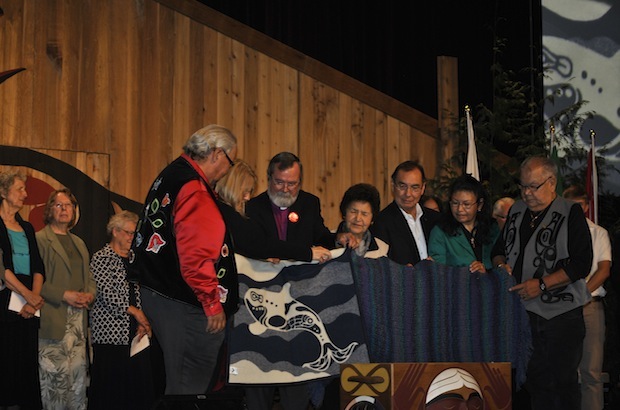 Vancouver— A woollen baby blanket with the symbol of the sea wolf whale that sings a song and a prayer shawl were offered on Sept. 21 by the Anglican Church of Canada as “expressions of reconciliation” at the , which is aimed at documenting the experiences of Indian residential school survivors.

Over a thousand survivors, their family members, representatives of churches and government, and local citizens gathered at the Pacific National Exhibition (PNE) for the event held Sept. 18 to 21.

The Anglican church’s expressions of reconciliation were presented by Archbishop John Privett, bishop of the diocese of Kootenay and metropolitan (senior bishop) of the ecclesiastical province of British Columbia, and Charon Spinks, an elder from the Interior Coast Salish in Lytton, B.C. A parishioner at St. Mary’s and St. Paul’s Anglican Church, Spinks attended the Anglican-run St. George’s Indian Residential School in Lytton, where many abuses have been recorded.

The blanket symbolizes the children “who didn’t have the comfort of a blanket, the safety of home and the love of family” when they were at residential schools, said Privett in his speech. It is also a sign of the church’s commitment to the work of truth and reconciliation, of deepening relationships with Canada’s indigenous people, of continuing prayers and of “our hope and prayer that children yet unborn may be born into a community of mutual respect and right relationships,” Privett said. The shawl, knit by an Anglican parishioner in the province of British Columbia, was “made with love and woven with prayer,” added Privett.  “It represents our continuing prayer for survivors and a concrete sign that what happened to you matters to us.”

Paying tribute to survivors who “courageously shared their stories” about their experiences at the schools, Privett said, “Your stories have touched me personally and powerfully, and I will carry some of your words in my heart for a very long time.”

He added: “In all honesty, I have to tell you that some of the stories that I have heard have cut to my heart.”

Privett, who—along with B.C. bishops, local clergy, lay people and staff of the national church—listened to survivors’ accounts at the churches’ listening area, the TRC commissioners’ panel and other gatherings, said he had heard stories of immense loneliness, fear and confusion.

“The most painful of all I’ve heard are the stories of widespread abuse,” said Privett, adding that he has been “personally shocked and saddened and shamed” by the legacy of residential schools and the part that the Anglican church has played in it.

From the late 19th century until the mid-1990s, about 150,000 First Nations, Métis and Inuit children were taken from their homes and sent to residential schools as part of the government’s policy of assimilation. The Anglican church operated over 30 of these schools across Canada; and the rest were run by the Roman Catholic, United and Presbyterian churches.

“The telling has been painful and it has been painful to listen to them. But your stories need to be told and we in the churches and in all of Canada need to hear them,” said Privett. “What happened to you was wrong…”

Privett echoed some of the words in the apology to indigenous people delivered by then-primate Archbishop Michael Peers in 1993: “I am so deeply sorry for the suffering our church caused in your live, in your families, across generations, and in your communities.”

He acknowledged that “words of apology are not enough.” An apology “is just one step along the path to real reconciliation; the path which, in the end, is the work of the spirit,” he added. “It is a sacred journey that will unfold in the Creator’s time.”

While the past cannot be undone, “what we do now can shape a better future,” said Privett.

The Anglican church is committed to taking concrete steps to show its sincerity in working toward reconciliation, he said, noting that the primate, Archbishop Fred Hiltz, has established a commission that will look into how the church can do more to help advance reconciliation.

“We are committed to the process of restoring right relationships and laying the foundation for the future,” said Privett. He noted that the church has repudiated the Doctrine of Discovery and has endorsed the UN Declaration on the Rights of Indigenous People. It is also working toward the full realization of a self-governing indigenous church, he said, adding that at the General Synod last summer, the church celebrated the establishment of a new indigenous diocese of Northern Ontario.

Spinks, for her part, said what sustained her through her nine years at St. George’s residential school—which she entered when she was six years old—was her grandfather’s teaching. “He said, ‘Whatever happens, don’t let them take your spirit away.’ ”

Her grandfather also strongly believed that “we are here to help another human being.” Spinks said that as a result, her mother became a pastoral elder at the Anglican church, and Spinks herself, a community worker, has focused on helping her fellow survivors heal.

She urged survivors not to live in fear and doubt, and urged them to tear down the walls of grief and trauma so that a better, more beautiful life can emerge.