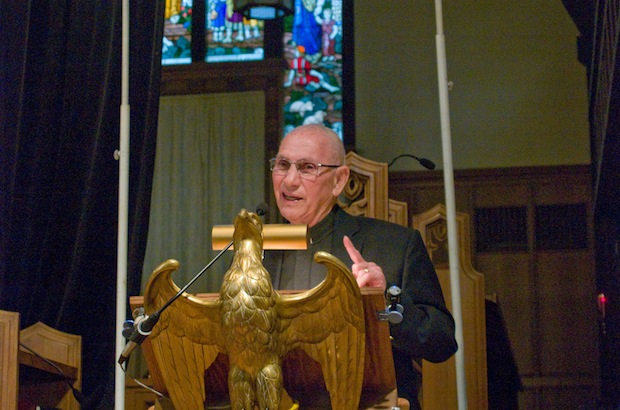 The Rev. Dr. Naim Ateek, the Palestinian Anglican who heads the Sabeel Ecumenical Liberation Theology Centre in Jerusalem, told a conference in Vancouver April 23 that Anglicans were instrumental in developing the doctrine of Christian Zionism over hundreds of years, and should now work to curb its political influence.

British Anglicans as early as the 16th century promoted the belief that the Jewish people must be restored to the Promised Land of Palestine to fulfill a biblical prophecy before the Second Coming of Christ, said Ateek.

Ateek said it was an Irish Anglican priest, the Rev. John Nelson Darby who developed a theological reading of the Bible that sets out a series of the ages that will lead to the “End Times.” It is termed Dispensationalism. Darby later left the Church of Ireland, but his ideas were popularized in the 1909 Scofield Reference Bible published by the British Oxford University Press.

Anthony Ashley Cooper, the 7th Earl of Shaftesbury, an Anglican politician and social reformer in the 1800s, had been the first person (in 1838) to propose resettlement of Jews in Palestine. Later, Anglican priest the Rev. William Henry Hechler, a close friend of the founder of modern Zionism, Theodor Herzl, was the only non-Jewish person at the first Zionist Congress in Switzerland in 1897—and probably the first person called a “Christian Zionist,” said Ateek.  “The Anglican church in Jerusalem was started by people who wanted the return of Jews to Jerusalem,” said Ateek. “The people of Palestine did not matter. No one was thinking of them.”

The Balfour Declaration in 1917 confirmed the British government’s support for the establishment in Palestine of a homeland for the Jewish people. It was a “stark, colonial project,” said Ateek.

American President Woodrow Wilson’s acquiescence to the Balfour Declaration—despite Wilson’s professed belief in the self-determination of peoples—contributed to the eventual result about 30 years later, the nakba, or catastrophe, said Ateek. That is the term used by Palestinians to describe their displacement in 1948 during the war that followed the establishment of the State of Israel. “But for Christian Zionists, the End Times had already begun.”

In recent years, Christian Zionism has been supported more by influential fundamentalist preachers than mainline churches. Influential preachers have included the Americans Jerry Falwell, John Hagee, Pat Robertson, Hal Lindsey and several others. Ateek said that their political influence has led American administrations to tone down any criticism of Israeli policy.

Theologically, Ateek said he objects to Christian Zionism—which he labelled “a Christian heresy”—on several grounds. It violates Christ’s message of love, justice and peace, he said. Its prophecy of the world ending in violence contradicts the view of a loving and merciful God. And it accepts, unquestionably, a tribalism evident in some parts of the Old Testament that is based on racial exclusivity.

The Palestinian speaker concluded by suggesting there are hopeful signs that Christian Zionism is losing its influence, especially among younger U.S. evangelicals. Recent surveys and conferences have shown this, he said. The response to several documentaries showing the plight of Palestinians has been positive. And there is growing support for a boycott of Israeli goods to pressure the Israeli government to change its policies.

“We want Israel to be secure,” said Ateek, “but we want justice and peace for the Palestinians.”

He suggested several actions that Anglicans could take. First of all, they should be engaged in the issue. “Whenever possible, we need to reach out to our Christian Zionists with love and care.”

He said that Anglicans should use the biblical text “as Jesus used it,” to convey messages of justice and love. He said that Jesus never quoted from books in the Hebrew scriptures of Numbers, Joshua or Judges or any passages that were “punitive, imperialistic or exclusionary.” Texts that appear to promote tribalism should be used carefully, if at all, said Ateek. He encouraged visits to Palestine and Israel so that people can “discover for themselves the reality on the ground.”

Anglicans should encourage their religious as well as political leaders to speak out against discrimination and racism in any form, be it anti-Semitism or Islamophobia, he said, adding that international law should be upheld.

Whatever is done, actions should be non-violent, Ateek emphasized. “Non-violence is the most radical challenge we can give to injustice,” he said. “And we must never give up—we must never despair.”

Ateek was introduced by retired Bishop Michael Ingham, whose support of a resolution that asked Anglicans to be aware of Christian Zionism greatly helped its passage at the last General Synod, according to conference organizer the Rev. Robert Assaly.

A response to the speech came from the Rev. Jay Olson of South Burnaby United Church, who asked the conference to work on the question: “What does it mean to reach out to the Christian Zionists in love and care when I would rather avoid all that?”

About two dozen pickets from Vancouver and Fraser Valley area churches and organizations, which object to how the Sabeel organization characterizes Christian Zionism, greeted participants who attended the conference. Also present were five black-uniformed members of the Jewish Defense League of Canada, who said they came from Montreal and Toronto to monitor the proceedings.

Several of the pickets stowed their signs and leaflets, and entered St. Mary’s Kerrisdale to listen politely to Ateek’s speech. The evening’s address was public, although most of the rest of the sessions of the conference were open only to registrants with nametags.

Betty-Lou Loewen of Abbotsford, B.C., a representative of the International Christian Embassy in Jerusalem, a Christian Zionist group, said the speech was difficult to listen to, especially the accusation of heresy.

Present also were four Vancouver police officers, who stood silently near the church entrance. The police were present at later sessions, too. Both representatives of the conference organizers and the pickets said they had notified the police of the event, concerned about possible violence from the other side.