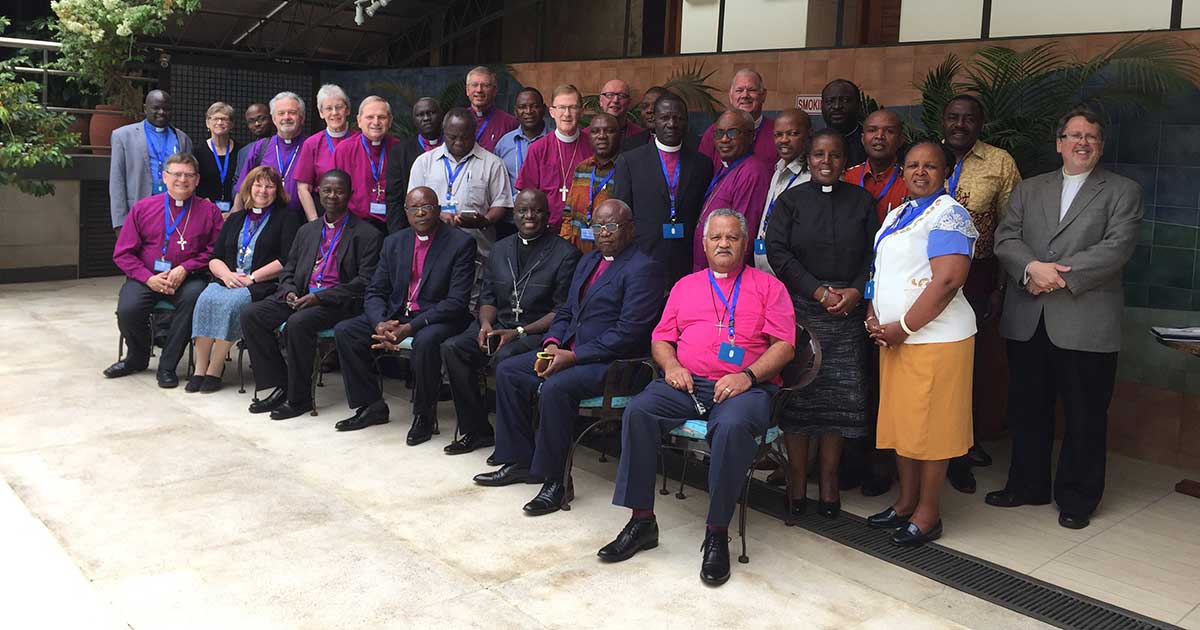 The Consultation of Anglican Bishops in Dialogue initially grew out of the 2008 Lambeth Conference, prompted by recognition of the need for conversation in light of disagreements over issues such as same-sex marriage. As the next Lambeth gathering approaches, it is only fitting that bishops at the latest consultation found themselves increasingly focused on plans for Lambeth 2020 and beyond.

Now in its eighth year, the most recent Consultation of Anglican Bishops in Dialogue took place from June 14-18 in Nairobi, Kenya. The theme of this year’s consultation was haraambe, a word originating in Kenya that means, “to pull up together”, or joining hands to build and work for the common good. The consultation itself pulled together bishops and archbishops from Kenya, Ghana, Tanzania, Zambia, South Africa, England, Canada, and the United States.

“I think it was an outstanding gathering,” said Bishop Michael Bird of the Diocese of Niagara. “We had wonderful discussion. There were a few new bishops involved, and it was a great opportunity to reconnect with people that we have gathered with over the years.”

The gathering, he said, served as an opportunity to plan out what future dialogue would discuss over the next two meetings in preparation for Lambeth 2020. As is customary, the bishops have released a testimony summarizing the fruits of their consultation: A Testimony of Mutual Commitment and Pulling Together—Haraambe.

“What happened this year was really taking a compass reading of where we’ve been, what we’ve done, and what the next two years will look like,” Bishop Bird said.

Several representatives of the Anglican Church of Canada attended this year’s consultation. The Rev. Canon Dr. Isaac Kawuki Mukasa, Africa Relations Coordinator, has coordinated and attended all eight meetings since 2010.

Looking back on the consultations thus far, he believed they had seen the bishops “coming to an understanding that they must continue to be partners in mission, in spite of their differences.”

“Certainly the acrimony, name-calling and demonization of a decade ago has gone,” Canon Mukasa said. “These men and women are building a strong relationship among themselves, characterized by friendship and deep affection.

“They still disagree on some issues, but have now built enough trust to be able to talk honestly and forthrightly to one another without acrimony. There is also a greater awareness of the different mission fields in which they have been called and the demands thereof.”

Both Bishop Bird and Bishop John Chapman of the Diocese of Ottawa have attended all eight consultations, and describe them as highlights of their episcopal ministry.

Early on, Bishop Chapman said, there were many misconceptions between African bishops and those from North America and England.

“From the Canadian point of view, we tended to paint Africa with one brush, and there’s as much diversity of viewpoint in Africa as there is here,” the Ottawa bishop recalled. “They were believing propaganda about us … I think it would be reasonably fair to say they were thinking of us as not particularly faithful—that the gospel is disposable, really, if need be.

“Even in that very first meeting, you could see the propaganda that existed on both sides about each other was already beginning to dissipate. It was really quite fascinating.”

‘A renewed faithfulness to the communion’

Since then, the bishops have only developed a deeper understanding for the context in which their foreign counterparts carry out ministry. The latest consultation saw the bishops talk about issues ranging from colonialism to human sexuality, from pastoral issues to climate change and the threat of drought.

Above all, in the course of their growing friendships and mutual understanding, the bishops have come to a deeper appreciation for the ongoing value of the worldwide Anglican Communion.

“This time, more than any of the others, we were hearing from each other a renewed faithfulness to the communion … This one was different in that it was a given, right from the beginning, that this communion is valuable and it has to be preserved … not just preserved, but it has to be nurtured and supported,” Bishop Chapman said.

“The opportunity, particularly in small one-on-one conversations or at meals, to go deeper into differences [of] culture and theology—that is invaluable,” she said.

Lessons for Lambeth and beyond

Global Relations Director Andrea Mann said that the meeting in Nairobi sought to look at ways in which the Consultation of Anglican Bishops in Dialogue might configure itself past the 2020 Lambeth Conference—both to optimize what it has learned in the last decade, and to “find new structures that are in sync with the kind of organic growth that this conversation has experienced.”

That growth has seen the consultation evolve from 12 people attending what Mann described as a “fringe event” in its early days to a total of 49 bishops that have attended over the years.

The main result of the latest consultation, Canon Mukasa said, was “a greater awareness of the considerable data these meetings have accumulated over the last eight years, and the opportunity now to reflect on all of that and leveraging it toward greater healing in the communion.”

“As the only informal group coming out of Lambeth 2008 that has been able to meet regularly and consistently for almost a decade now, the group came out of this meeting committed to sharing their experience and learning to the wider communion.”

Read A Testimony of Mutual Commitment and Pulling Together—Haraambe.